Emotion Technology Looks to the Next Generation

Emotion Technology CEO Christopher Gandin Le  recently publish an article in the Huffington Post stating that the future of suicide prevention rests on the new ideas of young people and new technology.

“I’ve reached the limit to what I can imagine as one person,” said Le. “ It’s time for people who are far smarter than me and far less experienced in doing this work to innovate.”

Telling your iPhone assistant that you are thinking about hurting yourself now leads to automated intervention on behalf of Siri.

The voice-activated software responds to several similar commands, such as “I want to jump off a bridge,” and refers the National Suicide Prevention hotline number to the user. Could a direct connection to a Crisis Chat channel be the next feature in store? 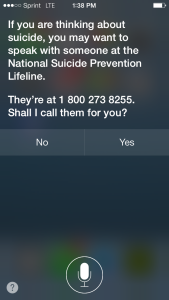 Many crisis interventions organizations are stepping up their content creation game to reach audiences where they are – the Web.

Lifeline’s stylish blog titled You Matter looks fantastic and is extremely readable. There are several dozen posts for audiences who are in crisis or may be worried about someone else in crisis. Self-care tips, positive message, and tutorials are common themes for the blog.

HBO’s documentary Crisis Hotline: Veterans Press 1 spotlights the traumas endured by America’s veterans as seen through the eyes of the crisis counselors who take the calls and chats.

Additionally, NPR published an article in September 2013 about the veteran’s service which describes the stories soldiers share with the hotline.  The article features four hotline employees who share their experiences with StoryCorps, — an American non-profit organization whose mission is to tell  the stories of Americans from all backgrounds and belief.

Have an idea for a crisis intervention technology project? We’d love to hear about it! Contact us today.